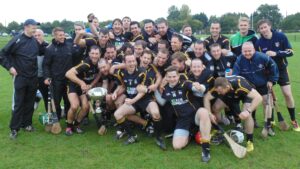 For a fourth year in a row Fullen Gaels have been crowned Warwickshire champions after pipping John Mitchel’s in Sunday’s final at Pairc na hÉireann. Vinny Morrissey scored the only goal of the game six minutes before the interval to leave Gaels two points to the good at the change of ends and despite a rousing start to the second-half by Mitchel’s the champions were able to keep their noses in front and retain their title.

A frenetic opening half saw little between the sides for the most part with both sides crunching into the tackles at a ferocious pace. Gaels landed the first two scores of the game within the first three minutes as Enda Lyons and Peter Ryan slotted over similar efforts from close to the forty-five metre line, while down at the other end a teasing free from Sean Hennessey – who ended the game as top score for Mitchel’s with seven free conversions – required a firm parry from goalkeeper Tom Goulding. Some alert defending from Liam Knocker was then required to keep Mitchel’s at bay after Emmet McCabe tip-toed his way along the end line to play an enticing ball into the goalmouth.

Mitchel’s were level by the twelve-minute mark though, Hennessey stepping up to slot two frees straight over the bar. The battle for the breaking ball was fierce, particularly from restarts where both half-back lines repelled more than they conceded, however there were scoring opportunities available and shortly after Vinny Morrissey brought a smart save out of Mike Cremin Fullen Gaels restored their two-point advantage thanks to a fine effort from a tight angle by Ryan and a superb run and strike from the lively wing-forward Lyons. It was the livewire on the wing who created the game’s only goal, outstripping his marker to head for goal along the right flank and dropping an effort into the goalmouth that fell kindly to the incoming Morrissey who reacted quickest to sweep a low shot home beyond Cremin.

Mitchel’s rallied well in the final five minutes of the first-half, Hennessey adding a third point from a set piece and Cormac Behan launching a fantastic effort from the touchline that dissected the posts. Mitchels were demonstrating their staying power in the middle portion of the game, with Simon Wilson deployed to the half-back line they upped their intensity to force the play back into their favour and they were level within the opening throes of the second-half as Hennessey stepped up to the plate to fire over frees four and five in quick succession. Yet when they sniffed danger Fullen Gaels reacted well, Vinny Morrissey tapping over a free from close to the left touchline and Greg Jacob tapping over a fine effort while off balance. They might have claimed a second goal as a dropping free into the goalmouth was forced home by Ryan, only to be ruled out for a foul of goalkeeper Cremin.

Mitchel’s responded with another Hennessey free but by the midway point of the second-half a number of set piece strikes were missing their target leaving the holders with the chance to retaliate. Simon Wallace landed a fine strike from halfway out and Morrissey tucked over his second free of the game to extend the lead to three points before a neat pass from Jacob released Lyons to slot another point over the bar. Needing to respond to keep in touch, Mitchel’s fought back once more; Hennessey claiming possession out wide to present Donncha Kennedy with the chance to fizz a sixty metre effort straight between the posts before wing-back Padraig McCloskey advanced forward to launch another superb effort from long range high over the bar.

Yet it was to prove the last score for Mitchel’s as Fullen Gaels finished the stronger to take the win and the title once again; once more it was Morrissey leading the charge from corner-forward with two points in succession – the second a deft scoop over the bar after Gaels overran the Mitchels full-back line. From the resulting puck out Jacob pinched possession on the right flank to return the ball back over the bar and extend his side’s lead to four with just a couple of minutes remaining. Mitchel’s needed a late goal to have any chance of forcing a replay but Kennedy’s late strike on goal was repelled by Goulding who cleared the ball for one final time.