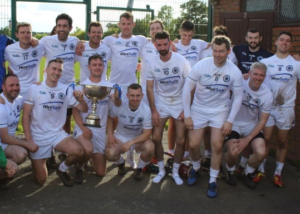 Sunday’s Warwickshire Senior Hurling Championship final between John Mitchel’s and St Finbarr’s proved a one-sided affair, with Mitchel’s retaining their county title by white-washing their Coventry opponents on the main pitch at Warwickshire headquarters. Having already been postponed once, the overnight downpour threatened to shelve this game again but both teams were given the green light to play on Sunday.

For Finbarr’s, getting to the final was a major achievement in itself as they overcame Erin go Bragh in the semi-final to set up a clash with the club which forms the spine of the county’s hurling panel. For a club that continues to make strides right across the GAA spectrum in Warwickshire a reversal like this should not viewed as too disheartening, indeed the hope is that they can stick at it to provide more competition in the county which can only be a good thing – particularly for the county panel.

Mitchel’s were in command from the off with scores coming thick and fast through the likes of Ciaran Heeney, Ian Dwyer and Breen Fallon. Kelvin Magree tucked home the first of five goals for the afternoon at the second attempt before Heeney latched on to a through ball from Dwyer to fire home goal number two.

Goals three and four came in quick succession before the half-time interval through Magee and Robbie Dooley as Mitchel’s kept turning the screw. Their fifth goal came courtesy of Dywer who burst through from the left to fire low past Finbarrs keeper Adrian Moore. It was a tough assignment for Moore who to his credit battled on gamely amidst the one sided nature of the match, notably producing a superb save to deny Dooley from point-blank range.

There was still time for Mitchel’s to ring the changes and give game time to the bench and they rounded off the game with some excellent strikes from long range by Heeney, captain Robbie Curley and Fallon who came close to grabbing a sixth goal when his low shot somehow landed wide of Moore’s far post.