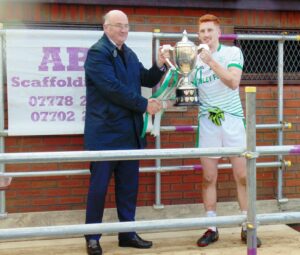 Uachtarán Chumann Lúthchleas Gael John Horan was guest of honour at Warwickshire headquarters as the county came together to watch the showpiece event of the season where one of the most compelling finals in years unfolded in front of a bumper crowd. Mercifully the weather held firm on the whole, with McDermott’s gunning for a fifth successive title and the Coventry challengers looking to end a thirteen year Championship drought. McDermott’s started the brighter with opening scores from Declan Staunton and Michael Mannion before Jack Keogh responded with a brace of frees.

McDermott’s had the upper hand and four successive points saw them move into a useful lead, while Casement’s goalkeeper Callum Brown needed to be alert to clear a Conal Dowling goal bound effort. Yet as the game moved towards half-time, Casement’s found their attacking rhythm to senstationally turn the tables on their opponents. Three more Keogh frees nudged them back into range before a Joe Meagher break down the right saw Rory Smith play in Keogh to calmly slot the ball beyond Macauley Felgate for the opening goal of the game. Seconds later they struck again, Keogh’s high ball causing enough chaos for Aidan Cavigan to get to the breaking ball first and find the back of the net.

Once Kevin Ryan pointed the opening score of the second-half, Casement’s were six to the good. McDermott’s needed a massive response to turn the tide and they got one with the introduction of Caolan McAleer, whose five second half scores (four frees) proved crucial. A run of four points in a row generated a momentum shift back to McDermott’s who also missed golden goal opportunities for Niall Gilbride and Kevin O’Brien, the latter shooting straight at Brown from point-blank range.

Casement’s did their utmost to stem the tide but with the loss of Dan Harnett from full-back and the re-shuffling of the pack, they struggled to regain a foothold. A total of 0-3 in the second-half simply wasn’t enough to stay in front, although when Kevin Ryan landed an inspirational point when his side needed it most midway through the half they were still ahead and still very much in contention.

McAleer changed that with two superb frees and when James McDowell, who was a driving force all afternoon for his side, grabbed his fourth score the deficit was back down to one. It was all on the line at this stage, some five minutes left on the clock, when Joe Owens released McAleer to slot over the equaliser.

With the title up for grabs, McDermott’s’ captain Gilbride burst forward to land a thirty-metre effort and hand his side the lead. Casement’s gave it everything as they went on the hunt for a leveller but McDermott’s were able to absorb the pressure and win one final, clincher free for McAleer to convert.

So Sean McDermott’s head on to the All-Britain Championship, securing five-in-a-row. For Casement’s it was a case of so near yet so far, a huge improvement on the final of 2017 but one that will leave them pondering over the winter months. Had they fashioned a third goal there could have been a very different ending but ultimately the pressure and scoring opportunities created by McDermott’s told.

Player of the match:James McDowell (Sean McDermott’s)Caolan McAleer played a huge role off the bench but McDowell was the key driver for McDermott’s in their comeback win.