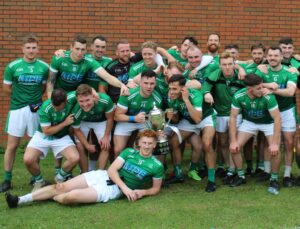 Sean McDermott’s remain the team to beat in Warwickshire, seeing off a late challenge from Roger Casement’s in Sunday’s county final to claim a historic eighth successive championship.

At Páirc na hÉireann a day of sunshine hosted four county finals with the senior final top of the bill. Casement’s were back in the senior final after missing out the previous season and were fully determined to finally end a run of four losses to McDermott’s in the last five years. Despite conceding early points to Joe Owens, James McDowell and Liam Gilbride they hit the front with the game’s opening goal tucked into the corner of the net by Mark O’Hare. What followed however was a McDermott’s blitz that ultimately left Casement’s facing too much to claw back.

Three goals in a frenzied spell before the water break elevated the defending champions into a commanding position – a long ball from Niall Gilbride ended with Joel Powney hitting the net before Cianan Folan’s low shot was adjudged to have crossed the line despite the best efforts of PJ Molloy and when Powney raced through moments later the corner-forward made no mistake beating Tom Bryce. With Casement’s reduced to fourteen after Tom Massey’s black card, McDermott’s bagged a fourth goal thanks to a delicious cross-field pass from Powney which was caught and lashed into the net by Conal Dowling.

Casement’s rallied to end the half with 1-05 but found themselves ten points down, Gilbride launching one from distance while his midfield partner Andy Willis tucked over a score from the right. The challengers could hardly be accused of playing poorly either, putting together some slick attacking moves in the opening half hour and meeting the physical challenge of McDermott’s full on. However, those four goals simply left a mountain to climb as the teams changed ends and for all money it looked as though McDermott’s would see out their 33rd county title in the closing half hour.

To their credit, Casement’s didn’t relent. They outscored McDermotts 2-04 to 0-02 in the second-half, ultimately running out of time to mount enough of a challenge for an equaliser by the end. They started with three successive scores through Aidan Cavigan, Oisin Webb and Seanie Boyle; indeed Cavigan might have found the net but for a defiant block by Michael Mannion, while substitute Rory Smith couldn’t stretch far enough to divert Craig Goodbody’s pass goalwards.

With time running out, Casement’s went direct. Jack Keogh forced their second goal over the line at the back post before a long ball caused sufficient havoc for Cavigan to pounce from close range and reduce the gap to two as the game moved into added time. McDermott’s restored a three-point cushion thanks to McDowell’s precise point and although there was still some seconds left for one last Casement’s attack Smith’s lob into the box dropped onto the crossbar and over.

So the champions keep their title, to do so for an eighth successive season is testament to the club’s winning mentality over a sustained period of time.

Player of the match:Niall Gilbride (Sean McDermott’s)The captain led by example, absorbing the hits from Casements and fronting up at key moments in the game scoring a belter in the first-half.