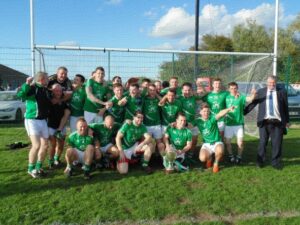 Sean McDermott’s have retained their Warwickshire crown but only after navigating their way through some choppy waters thanks to a stern Roger Casement’s challenge, claiming both senior and junior titles at a packed Warwickshire headquarters on Sunday.

The Coventry challengers asked some serious questions of the reigning champions to leave them five points adrift at half-time. However, thanks to some rapid scoring at the outset of the second-half, a Stephen Monaghan-inspired McDermott’s clawed their way back into the game to eventually run out the winners by three points as the Casement’s quest fell by the wayside.

Even so, Sunday’s final at Pairc na hÉireann was testament to how far Casement’s have come over the course of a season in which they celebrated their 60th anniversary since their founding back in 1956. Remarkably, after scoring a brace of goals against John Mitchel’s in the semi-final, Mark O’Hare repeated the exact same trick in the opening ten minutes of the final. He was in the perfect spot for his first as Casement’s went direct, the Sligo man tucking a shot beyond Macauley Felgate before pouncing on a spilt ball by the McDermott’s goalkeeper to ram home a second to cement a lead extended by points from Jack Keogh and Kevin Ryan.

Wing-forward Keogh was the star of the opening half hour, scoring an excellent long range free before adding a tremendous point from a side line effort. McDermott’s meanwhile were struggling to make inroads, although they did strike their opening goal when Chris Hayden squared the ball to the waiting Conal Dowling who rolled a low shot past Callum Brown. A tenacious point on the run from Ryan Bennett was soon followed by a thirty metre strike from fellow midfielder Andy Willis which sailed over the Casement’s bar, however at the other end the team in yellow were not resting on their laurels and scored a further point on the counter-attack from the boot of Ryan. Monaghan started to show his threat when he soloed his way in from the right wing towards goal only to have a goal bound shot deflected wide of the near post. Just before the interval Casement’s had a golden chance to really put McDermott’s under pressure when Keogh smartly flicked Ryan through on goal, however some resolute defending by a retreated Macs full-back line reeled Ryan back in to eventually clear the danger.

Had Ryan broken away from his markers, who knows what may have happened as the sides ended the half five points apart. McDermott’s regrouped, with Niall Gilbride reverting back to the engine room alongside Willis and Bennett, and they struck some vital early scores to completely change the complexion of the game. First up was a sweet strike on the left by James McDowell, before a turnover in a dangerous position enabled Macs to cycle the ball across the face of Brown’s goal where a waiting Monaghan tapped into the net.

All of a sudden, the momentum had completely flipped and McDermott’s almost took the lead when Dowling latched onto a long ball only to see his close range shot smartly stopped by Brown. Nonetheless, Casement’s were struggling to clear their own forty-five and they lost possession once more to allow Gilbride to strike over the equalising point. Moments later another loose ball out of defence presented Monaghan with the chance to strike for the lead and the full-forward made no mistake with a clinical effort.

Casement’s finally managed to hold onto possession up the field and their main target man Keogh popped up to land the fourth of five points for the afternoon. A teasing free from Daniel Walsh needed some firm goalkeeping from Felgate to prevent a third Casement’s goal but the scoring continued down at the clubhouse end as McDermott’s kicked through the gears, that man Monaghan striking two points in a row including one spectacular effort from the trickiest of angles out on the left wing.

Keogh continued to take the game to McDermott’s, cutting in from the left he tucked over another point from play but by this stage the chances were starting to run out and with Liam Gilbride and captain Niall McCooey popping up from defence to land two long range points the day and the title belonged to Sean McDermott’s once again.

Player of the match:Stephen Monaghan (Sean McDermott’s)Just when his side needed it, Monaghan answered the call with an early second-half goal alongside some crucial points to turn the game around.

Score of the match:A fantastic score from the side line by Jack Keogh came at a stage when Casement’s were putting it up to the reigning champions.