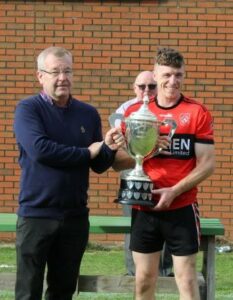 There’s a new dawn in Warwickshire and its sun rises over Coventry skies.

They needed to produce their best performance of the season to halt Sean McDermott’s in their quest for a ninth successive title – to knowledge no other GAA club in Britain has achieved such county domination as the eight-in-a-row won by McDermotts since 2014 – until Sunday they had only lost two finals since 2006 – and it is a mark of their reign as champions that Sunday’s final always remained in the balance until the closing minutes. The score line across the hour reflects Casement’s strong start, they never fell behind once they grabbed a foothold and their six-point lead at half-time was defended to the hilt as McDermott’s desperately sought that crucial goal in reply.

Lorcan Towey’s run and finish to the net past Dan Hallahan laid down the gauntlet in what was a fast-paced and clinical opening half hour from the challengers. The introduction of Mikey Walsh to their full-forward line has reaped rewards in shaping their attack this season, his surging run might have yielded a second goal as he fisted over the bar while both corner-forwards Jack Keogh and Rory Smith landed early confidence points.

At the other end, McDermott’s had their moments with two early Joel Powney frees and a point from Chris Hayden. Yet they were unable to gain enough ascendency in attack to draw themselves back level, the Casement’s midfield duo of Jack Ferron and James Gavin quietly going about their business as the better chances continued to come to men in red shirts. Two more Keogh frees and a fine finish by Towey on a counter-attack extended the lead to six, this was good reward for their first-half endeavour but with the wind favouring the defending champions in the second-half this was by no means a done deal.

For just as they did against St. Brendan’s in the semi-final, McDermott’s sprinted out of the blocks at the restart with two quick scores from Conal Dowling and Ryan Bennett. Keogh added a reply at the other end but the ball increasingly became the possession of men in green shirts now; with the game right in the balance, step forward Oisin Webb with the diving save of his life to keep McDermott’s at bay when a goal looked assured, Callum Browne equalling Webb with another goal line denial on the follow up. McDermott’s pressed again, James McDowell finding space to run on goal only to be denied by Cian Gallen’s excellent save – had those two moments conjured a goal, who knows where this final would have gone?

Yet that goal remained intact and a reinvigorated Casement’s started to see the finish line. Three points from Smith and Keogh (one free, one superb forty-five into the wind) leaving too much of a mountain for McDermott’s to climb in the closing minutes.

The final whistle brought jubilation to a club that finally made it in what was their sixth final in seven years, their first since 2005 – they celebrated for those missed seventeen years and for those club stalwarts they’ve missed during those seventeen years.